This PR is based off of https://github.com/matomo-org/matomo/pull/18213.

I read through all the file changes, I think maybe we can push plugins/vue/dist/** to .gitignore, and build them through Github actions. But I guess the problem is when someone pulls the branch it breaks the page.

I read through all the file changes, I think maybe we can push plugins/vue/dist/** to .gitignore,

Plugins are required to be distributed with those files since users are not expected to have node installed. At the moment this means keeping the files in the repo. If at some point we make it required to have node and to build the JS for git deployments, then we could only build in matomo-package + in the marketplace when publishing a plugin, then the built JS doesn't necessarily need to be in the repo. But that's a lot of work I'm guessing not a high priority right now.

@peterhashair was there a specific problem you wanted to solve w/ ignoring the compiled JS?

@diosmosis just try to pull this PR but got an error somehow on the dashboard. It could be I merge those conflicts. See the screenshot or missing a build step. 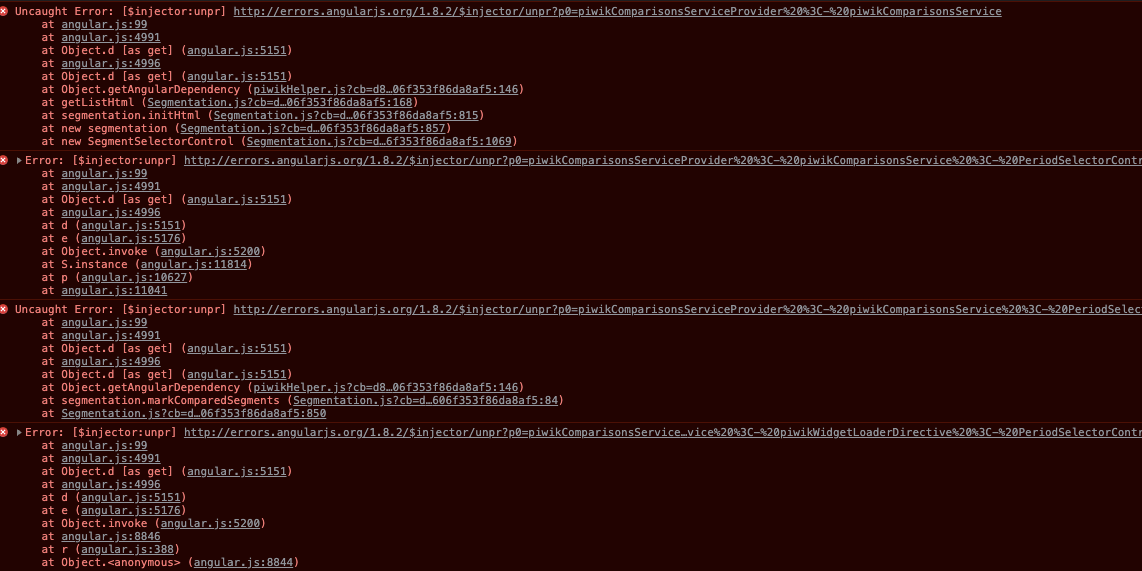 This PR is based off of https://github.com/matomo-org/matomo/pull/18213 which has more changes. I haven't updated this PR yet. Does this error happen on that PR as well?

@peterhashair I have no such issue on the vue-comparisons branch (the displayed error has to do w/ evolution icons and is unrelated):

Can you please make sure the new files are being used and provide more information, such as the full error message in the console, the URL, the list of widgets in the dashboard, etc.

EDIT: Actually from the error message it looks like the JS for CoreHome.umd.js is wrong somehow or not up to date. Can you run vue:build and see if it fixes the issue?

@diosmosis beside this PR. I got 3 questions.

Once we fully merged to VUE, I guess we don't need .adpater.ts. we can just call sth like that inside of .twig?

No, vue templates can't go directly into twig, Vue doesn't scan HTML like angularjs does. The twig templates will likely have to converted to Vue components and initiated via a Matomo-specific mechanism in twig templates.

why don't we use a VUE library (eg: Vuetify, Buffy, Elements, etc) for date-picker, etc.

I'm only converting angularjs/twig to Vue, nothing else. Introducing other libraries to replace jquery UI & materialize is extra work and would need to be accepted & prioritized by @tsteur / @mattab.

Are we going to make a summary page for all the VUE components we made and a guide for how to use them?

That is not currently part of the plan, but I can see it as possible. Again, @tsteur / @mattab would have to accept and prioritize it. Like introducing or replacing other libraries, it would not be done by me.

@diosmosis right, thanks for the explanation, that makes more sense. 😄

@peterhashair this is all out of scope for now indeed (I mentioned last week). For now it's purely migrating each component step by step from angular to Vue. Once this is all done we can look at other UI libs when there is a UI redesign or when something else comes up.

Re the documentation: We have this where the most common ones are documented and shown: https://matomo-url//index.php?module=Morpheus&action=demo&idSite=1&period=day&date=yesterday.

Eventually we can identify the ones that are used more often and add them there but it's not too much of a priority since many of them are self explaining. It'll be good to have though at some point so it's clear what UI components can be re-used as it's otherwise hard to know which ones exist. Maybe create a new issue for it?

Tests should be passing now.

@sgiehl this PR is ready for review (in case you weren't notified).

Added some docs related to the directive pattern: https://github.com/matomo-org/developer-documentation/pull/582

@diosmosis the changes are looking fine. The only thing left is, that the drop down menu e.g. for goals or dashboards doesn't behave the same.

@sgiehl those issues should be fixed.

@diosmosis awesome. everything seems to work as expected now 👍