Possibility to define multiple values for a custom dimension #16156

For example when using Custom Dimensions of scope "Page" as a way to track categories of an article, often an article can belong to multiple categories. Therefore it would be useful to be able to track multiple values for a same dimension. eg. the ability to define an array of values instead of just a string.

It is interesting to note that it seems possible to track multiple values for a given dimension using the "old" Custom Variables feature.
(which we plan to deprecate in the next year in https://github.com/matomo-org/matomo/issues/11524 although we will still support the feature afterwards in the Marketplace)

-> With Custom variables one can define the same variable in different "index / slots" and the multiple values will be recorded. This is useful when for example tracking multiple categories for a given Page or Article. Then one could send the data with for example a Tracking API request of piwik.php?idsite=1&rec=1&cvar={"1":["Page Category","Sports"],"2":["Page Category","Regional"]}

In the report of custom variables one can see the multiple values eg. 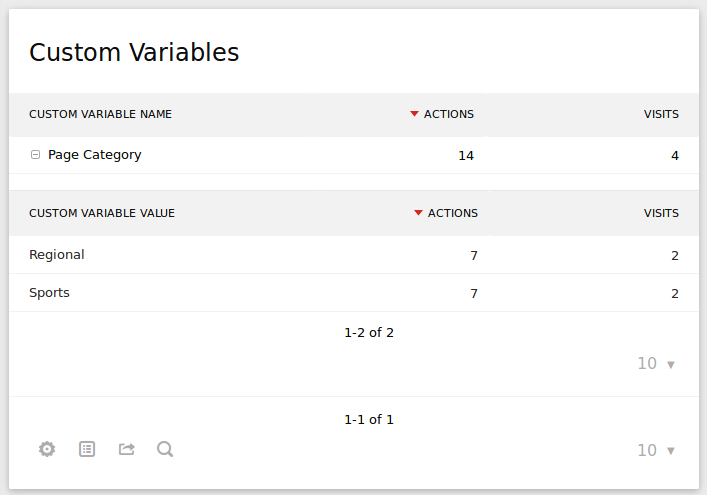 (It may be the first time we realise a given use case/feature is offered in Custom Variables but not in Custom Dimension?)

@mattab is this a planned feature for 4.x? We have some need for this. (Digital Object repositories with many metadata values per key we need to segment on, hierarchical membership of a page/Digital Object inside a collection, etc)

To allow many values, right now we are basically tracking the page view many times (once per value). Not a "big" issue if you are always segmenting by the dimension value and all your reports depend on that. But totally an issue when dealing with global stats.

I even thought of building a custom Plugin to deal with this (if can totally understandhow to make that plugin to track a view once only but generate many entries into the dimension and also integrate correctly with Segmentation, but then that seems less portable than depending on a core (or core provided plugin) feature.

Another option would be for us to go back to Variables (but they lack other needs). Is deprecating them still planned?

We currently don't plan to implement this feature.
Deprecating custom variables is still planned, but the plugin will stil be available on the Marketplace anyway so will keep working.

Is there some way to request that the feature be considered? Or is it ruled out by some architectural choice in the design of the new plugin? It's a little rough to have to tell my users "half of you want something that requires the deprecated (and presumably unmaintained) plug-in, and half of you want the new features in the new plug-in."

@benwarfield-usds commented on May 27th 2020

Indeed, it is the only feature that matches that description, as far as I’m aware. I’m not sure that telling my colleagues that they’re an edge case will really improve their situation, though. 😁

As far as I understand, right now it is not supported to provide multiple values for Custom Dimensions and it is not planned right now, correct?

In my use case, I just want to track user roles to group data sets by it.
What would you recommend to resolve this?

Yes @raDiesle it's not planned yet unfortunately. Maybe custom variables would help meanwhile? It's otherwise hard to recommend anything as it might depend on the use case. would maybe using multiple dimensions help like userRole1, userRole2, etc? This might work if only segmenting is needed. Grouping by it be probably not possible though.

Thanks for quick reply!
In my special case, right now it is sufficient to resolve by your suggested solution - so thanks for verification.
In the future, for my specific application, there will be user-groups & business-groups, where a user can have n-m combinations of a rule. The Cloud solution supports 25 custom dimensions, so maybe it will fit in.

This is a must-have for our analytics setup - we track impressions of content that can often have multiple authors, something we need to keep track of for the correct distribution of royalties. Without support for multiple values we have to manually search our CMS for the authors which is time-consuming and should be unnecessary. Are you planning to implement this feature?

-> Is there then really a need to discontinue the custom variables? Shouldn't it be renamed? Because as far as I know, this is also useful for custom search engine results.