Performance data will be tracked for each page view and will contain the following metrics:

Those metrics can be summed up to get the full page load time.

and an additional row action to show the page load evolution:

Also there is a new report page, that shows the overall page load evolution: 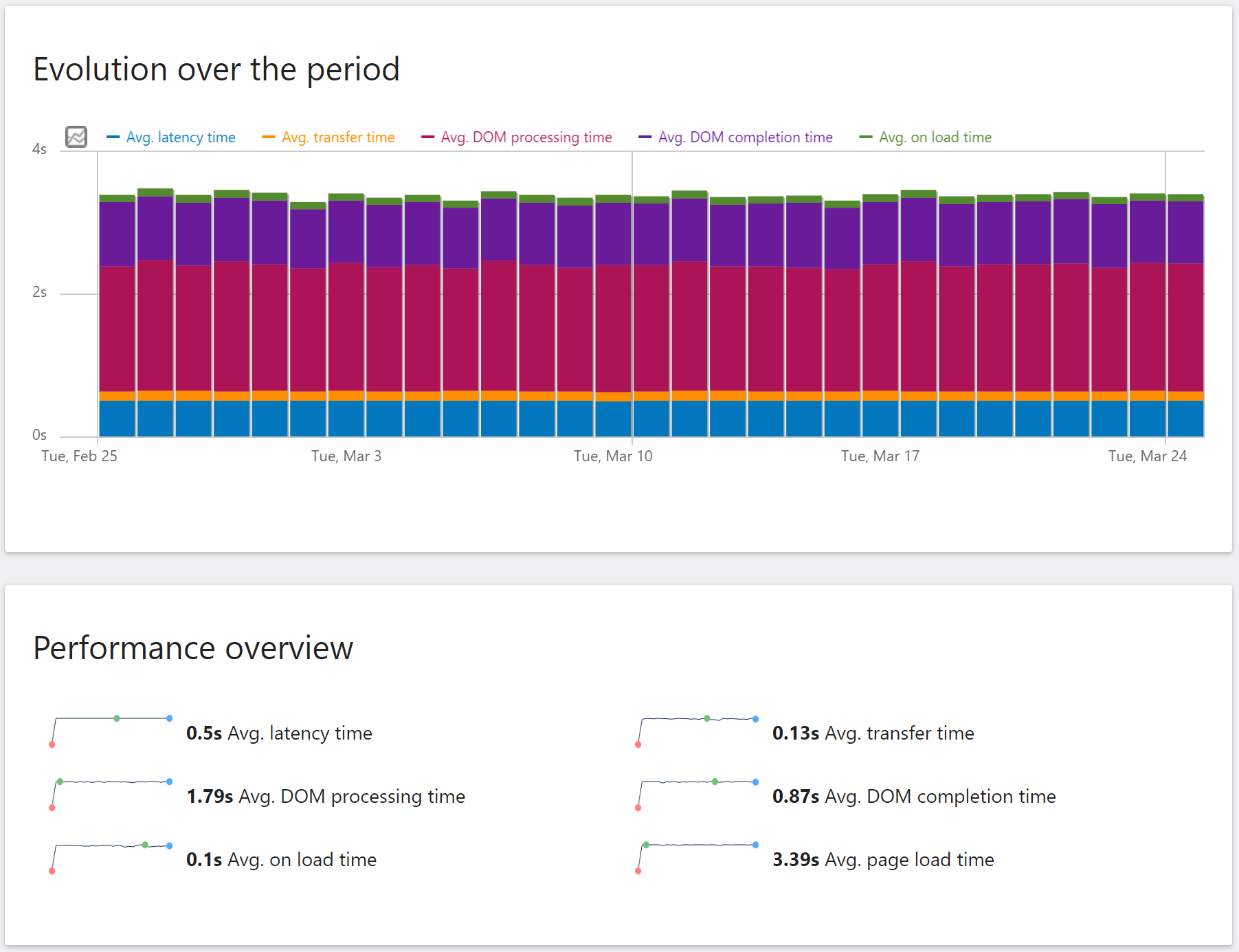 The reports for page performance are almost ready, but there are some more adjustments needed for the tracking.

Currently all the timing data would be sent with the pageview, but that doesn't actually work, as some of the performance timings might not yet be available when the pageview is tracked. Wondering how to solve that best. As sending the page view event after the onload event was finished won't be a usable solution, I currently see two possibilities with sending the timing data later:

@tsteur What would you prefer? Or do you maybe have a different idea? Also maybe you or @mattab have some comments or additional suggestions on the already implemented stuff (see PR description)

I actually haven't tested that through yet. But to have all metrics available in the timings api we would need to listen to the window.load event and add the tracking with a timeout of 0, so it's done when onload is finished. So depending on how the matomo tracker is included, I would say at least the onload metric won't be available and maybe also DOM Interactive to Complete, as Matomo might be executed within this process.

I would say at least the onload metric won't be available and maybe also DOM Interactive to Complete, as Matomo might be executed within this process.

We could send them with ping events, or other tracking requests if needed. Could even temporarily store data and track it on the next page view for the previous one should they visit another page but that gets too complicated. I would say we would simply document that in some cases the value wouldn't be recorded if the onload event happened yet and if they don't use the ping event or have other tracking requests. We certainly do not want to cause any extra tracking request just for that information.

Something to think about: Would we need to do anything for single page applications that track multiple page views within one page? I suppose only the first page would then get the metrics which be fine for now. Be good to not make this feature too complicated.

That might be ok as long as we only execute this query should it not be recorded yet. Meaning the tracker would need to make sure to send the metric only once and the server would only issue this query once and only if the action type is not a page view. When the metric is set in the request, and action type is a page view, then it can be recorded as part of the index.

We'll need to see what impact this update has on disk I/O later once in production. We may want a feature later to disable recording metrics after the page view was tracked to avoid this update statement and instead if user wants to have these metrics, force them to listen to the onload event for the track page view.

should be ready for a first review. Some tests of the submodules are still failing, but the expected system files will only need an update later...

wonder if we would want an "All tables column visualisation" and then show all page specific performance metrics?
Many people will never find this though. On the other side we maybe don't want to show all of them all the time so at least they would be able to get it, should they want to.

In this screen should we explain that some metrics might not be always tracked? and link to an FAQ or so?

Haven't looked at code yet otherwise or tested too much but looking good! The row evolution screen is quite cool!

There are still some weird failures in the UI tests. I'm still trying to investigate why. But a code review can already be done in the meantime...

Quick feedback on the UI/UX: Considering the metrics are technical and hard to understand, could we

show the definition on hover in tooltips.

and also show them in the in-app help section? like on Visitors Overview: 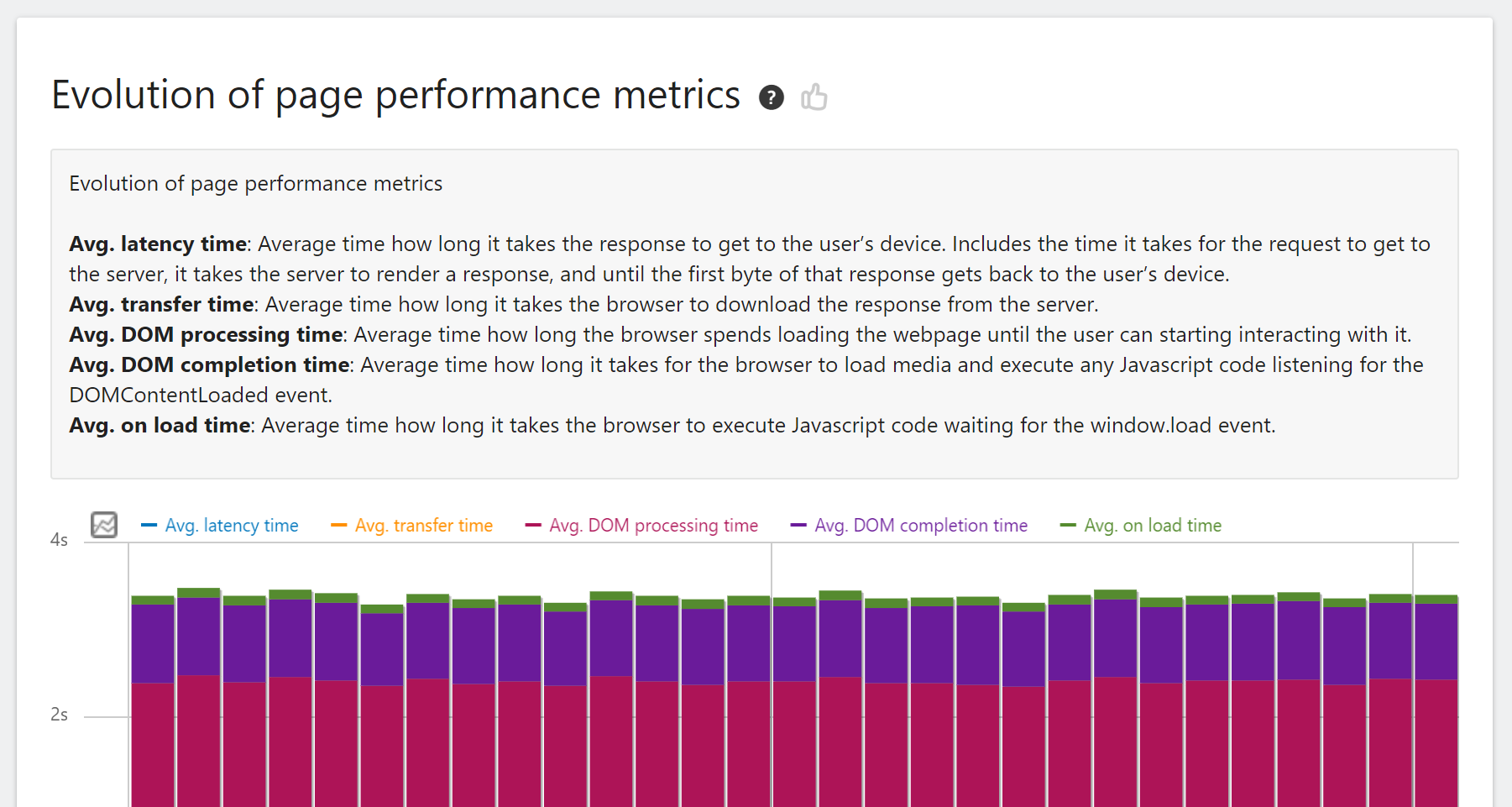 Also ideally these help text would explain both what it means + how to improve it eg. "Avg latency is X. To make latency better, you can sometimes do X and Y. On the other hand Z will make latency worst." or similar/better.

Giving advices what to do and what not is not yet done. And that might also be hard to do. If we really want to give the users a good advice what they should do, we could create a simple plugin to get some useful data from Google's PageSpeed API

The failing UI tests seem to fail because puppeteer fails to render the pages table report correctly. The additional column seems to make the report wider then the window causing puppeteer to render it like this:

Updated puppeteer locally, which seems to fix that issue. But it actually changes almost all screenshots slightly. Will do that in another PR, as that would be a bit too much to put it in here...

@tsteur the metrics are now split up as discussed. But it's still bit unclear to me how we should handle the old page generation metric. As I tried to describe before, piwik.js has a method setGenerationTimeMs, which allows it to set a custom value for the generation time. The new metrics are automatically filled based on the performance timing, with no possibility to set them manually. So users that used to set the value manually can't use the new methods for that anymore.
So how shall we handle that? shall we remove that possibility to set a custom value completely? e.g. remove the method setGenerationTimeMs or log a warning when the method is called instead. Also should the gt_ms param be processed on Matomo side if the value is set in a request or shall we remove that, as well?

So how shall we handle that? shall we remove that possibility to set a custom value completely? e.g. remove the method setGenerationTimeMs or log a warning when the method is called instead.

I would say it should be fine.

Also should the gt_ms param be processed on Matomo side if the value is set in a request or shall we remove that, as well?

I'd say we can remove it then as well.

@mattab fyi... we're removing generation time as it was never useful anyway and it'll be replaced by the new metrics see https://github.com/matomo-org/matomo/pull/15736#discussion_r402599498 existing data will still be shown for older reports.

Cheers team! It's a very good geek improvement but, isn't it a bit tricky report for a target of non-techy editors? Most of all they don’t have any clue about DOM ... :thinking:

fyi @sgiehl there are some conflicts, otherwise looks good

@tassoman thanks for the comment. There are inline helps that explain those metrics for those who don't understand them directly. Also the default reports will only show the page load time, which should be clear to everyone

Hi and thanks for the new feature.

I've searched for "equivalent", "corresponds", "identical" in this issue, looking for what would correspond to the old "avg generation time", no luck.

Is there any ? A client would like to be able to compare old 3.0 matomo statistics with newer 4.0 one.

Hi @AnnoyingTechnology that's unfortunately not quite possible unless you maybe built a custom plugin because the previous generation time is basically a combination of several metrics within the page performance. Sorry about that. If needed, instead of a custom plugin you could also connect to our API https://developer.matomo.org/api-reference/reporting-api and fetch the reports and aggregate this number in a script if needed. Fully aware though this might not be an option in this case. @sgiehl do you remember which performance metrics are basically equal to the previous generation time?

Assuming that most people only tracked the time the server needs to generate the page there is no value it could be directly mapped to.
The value that matches most is Latency. But that one also includes the time it took the request to reach the server.

Thanks to both of you for the clarification.
I wouldn't want to criticize a great tool that I benefit from for free. But this kinda look like an oversight.

In the case of my client, we migrated his applications to new servers, and upgraded the Matomo instance at the same time. Which prevents us from comparing the before/after performance easily.

Anyways, the new performance reports are so much better, he can deal with that !